Color techniques should be noted from the following points: First, the relationship between color and packaging, and second, the contrast between color and color itself. These two points are the key to the use of color.

(1) Foods are normally expressed in the main colors of goose yellow and pink, which gives people a sense of warmth and closeness. Of course, among them, tea uses a lot of green; beverages use a lot of green and blue; alcohol and cakes use a lot of red; children's food uses a lot of rose; daily cosmetics usually use its color The main colors are mostly rose, pink white, light green, light blue, and dark brown, to highlight the warm and elegant feeling; clothing and footwear are mostly dark green, dark blue, brown, or gray, to highlight the calm The beauty of elegance.

In terms of performance characteristics, as far as food is concerned, cakes and snacks mostly use gold, yellow and light yellow to give people the impression of fragrance; tea, beer and other beverages mostly use red or green types, symbolizing the richness and aroma of tea; Tomato juice and apple juice are mostly red, which indicates the nature of the item. Although some packages do not look similar to the colors of the product attributes as mentioned above from the main color, but if you look carefully, if the design of the package is written by your own home, then the picture of its packaging Zhong Zun has the symbolic color block, color point, color line or concentrated content highlighted with that color. This should be a triumph for everyone. There are many such examples in the packaging of some clothing and some makeup, and even the packaging of some wine.

(2) Contrast relationship between color and color

(1) Contrast of color use. This is the most frequent in the current packaging design color, and the most widely used. It is very common in many graphic designs (referring to posters, hanging pictures, or landscape binding). The so-called contrast between the shades should refer to the two shades in the design color that appear cleverly on a picture at the same time, which produces a more coordinated perspective effect. It is usually used as a large-area light-colored floor, and a dark composition is used on it, such as a light yellow floor, a brown colored composition, or a light yellow or white pattern line in the brown color block; also as Use light green for the base; dark green for the composition; pink for the base; the red for the composition; the light gray for the base; the soap black for the composition, etc. These are the contrasts of the colors used. In this form of packaging design, we can use some cosmetic packaging or some Western wine packaging, especially in Western Europe wine packaging. China's Changyu wine and Shuanghui's sausage and Xijie's meat packaging are mostly expressed in this form. This type of packaging is also common in Japan and South Korea and Taiwan. The visual effects it displays are bright, simple, gentle and elegant.

(2) The contrast of light and heavy used in color (or the contrast of light and dark) This is also one of the important reproduction methods in the application of packaging color. This light and heavy contrast is often used to bring out the dignified and deep theme patterns on the light and elegant background, or in the dignified and deep theme patterns (mostly the color block pattern). Show the theme and name of the light and elegant packaging, as well as the trademark or advertising slogan. Conversely, it is also covered with a large area of â€‹â€‹heavy and deep pigments. In addition, use light and elegant tones or concentrate a certain color block or fully decorate some patterns. In this light and heavy contrast, the general pigments have a coordinated color contrast and a cold and warm color contrast. The method of coordinated color contrast is often light green to dark green; light yellow to dark coffee; pink to red, etc., and the contrast of cold and warm colors is mostly Black and white, red and blue, etc.

(3) Dot-to-face contrast (or size contrast) of color use This contrast is mainly used in the design process of a packaging picture, using the contrast from a center or concentrated point on the whole picture, that is, small range and large range Contrast between pictures. In daily life, especially in washing cosmetics, we can see that on the packaging box of a product, there is nothing in the entire area, and there is a very obvious small box of heavy color in the middle. Oval or small round) and then the theme of the brand and name of the package content is reflected from the small square screen, which is not only a combination of points and faces, but also a contrast between large and small, and occasionally from point to And the gradual transition contrast.

(4) Contrast and simplicity of color usage. We can see the unified 100 instant noodles. On the bottom of their packaging is the actual pattern of instant noodles, and at the top of the screen is the entire clean green and red color, which is very prominent "100", then look at the cover of the 66th issue of "Packaging World" (also called book packaging). Using a large area of â€‹â€‹straw to lay out the photos, it seems very complicated and even the four words of the packaging world are mixed in, but the center position of the positive picture shows a clean and round blank. It is marked with "This edition will be expanded and expanded in 2000" and "Welcome to subscribe to the local post office". It's that simple and simple, but it independently puts the focus of the magazine's most need to express ideas. I have also seen a dumpling packaging bag and a seasoning packaging bag in the store. The whole picture uses green black and yellow pigments and intertwined on one screen, that is, I want to show that the trademark is forced to be impatient I also wanted to express the name and the supporting pattern. As a result, the large-scale complicated design did not have any practical meaning. The dark lining pattern appeared, but the main body of the above description should be diluted and flooded, causing this kind of packaging. A sense of depression and irritability in people's psychology naturally affects sales.

(5) The contrast between the elegance and the desire to use color is mainly to highlight the common characters and to contrast its elegance. And this vulgar way of expression is to use the "dirty" chaos and disorder of the color (in fact, it is original, some Western oil paintings are very about this expression-that is, modern abstract art). This kind of composition is either a symbolic disclosure of the theme, or it serves the theme of "emphasizing the lotus", making it a little red in the flowers. For example, on a packaging screen, it seems to be carelessly painting a bunch of messy colors or throwing them on it. Then quietly aside or in it cleverly clear the theme of the pattern. This is a very interesting thing. In addition to packaging, even book bindings, advertisements, posters on promotional posters, and casual sections on TV have tried this way.

The combination of these colors is entirely because a pattern needs to be expressed by the contrast of different colors, but this pigment is an indispensable object that constitutes the entire packaging pattern element. Some patterns are even different. Ingenious combination of pigments. Therefore, in the process of studying packaging design, if you do not pay attention to grasp the contrast between color and color itself, there is no way to design a good packaging pattern.

The Cheese Grater is a convenient daily gadgets. It will make cheese and butter softer, and protect your hands, nobody will reject these useful and convenient tools. They 're made from high quality and tight stainless steel, usually come along with a ergonomic soft plastic handle, non rust, durable, light, safe and safe in dishwasher are their advantages. 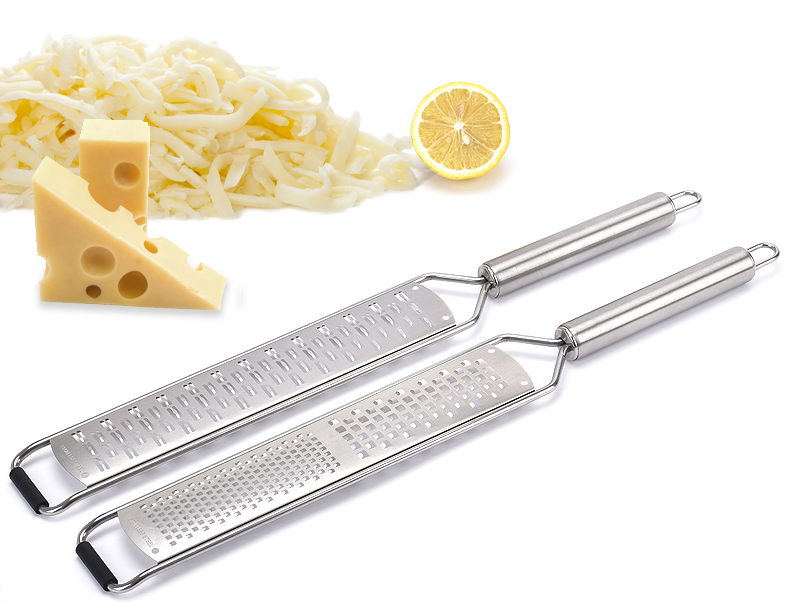